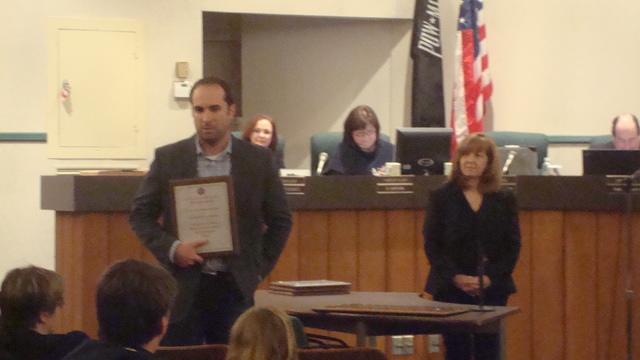 Last night on Tuesday February 19, 2013 Quality 1st Companies was recognized and awarded by the mayor of Aberdeen, New Jersey. During the council meeting Mayor Fred Tagliarini awarded local heroes, companies, and those who were active and helping others in the community during the aftermath of Hurricane Sandy. The award recognition ceremony took place at the City Hall of Aberdeen, New Jersey at 7:00pm.

In December of 2012 a family in the town of Aberdeen was very much affected by the hurricane and had to deal with the aftermath of a flooded basement in their home. They decided to call the mayor and other council members for help. Quality 1st Basement Systems was there to help with the FREE installation of a sump pump and full perimeter drainage system to fully protect their basement and home. Their basement has since been left dry and they are protected from future storms and snow melt. The mayor stated "There are not enough words to express how grateful myself and the township of Aberdeen are to those of you who have helped our residents during such hardships like Hurricane Sandy."

Other members who were awarded during the ceremony included the Aberdeen Police Department, police officials, the volunteer chief of the Fire Department of Aberdeen, as well as other companies and corporations who helped residents with the aftermath of Hurricane Sandy.

Back to Previous Page
Back to News & Events

We serve the following areas